A good local distributor of new machines and parts is a place called Cleveland Coin Machine Exchange. It’s kind of funny buying parts for Super Pacman there because I got the game from the Cleveland area. Oh, and did I mention they have a showroom full of the latest games set to Free Play for “testing”? Yep, it’s pretty sweet.

So I stop in the place at lunch today and ask for a set of coin mechs at the parts counter. The parts guy asks what I need them for so I give a really brief explanation about working on a Super Pacman machine and needing some replacements. He gets this funny look and tells me that I’m not going to be able to buy something like that for under $300! I asked him if he was joking because I can buy these things online for $12 each. Then, he snaps out of it and tells me that he has them for $16.95. Ooooookay… I guess he was just confused about what I wanted.

Anyway, I picked up a nice pair of Imonex V9 mechs for a total of $33.90. I like them because they’re mostly plastic (so they won’t rust) and this particular model has no moving parts. I’m not sure how that must work from a mechanical standpoint, but they both operate flawlessly. Here’s what they look like:

Installation was almost too easy. Mechs are typically mounted with pegs on the sides so all I had to do was snap them into place. It literally took less than a minute. Here’s what they look like in the coin door: 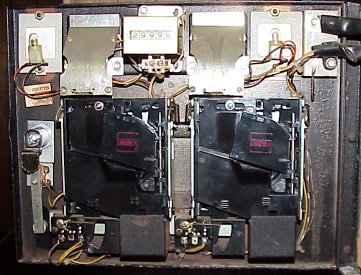