As I mentioned before, I had an issue where the red color would disappear from the screen. When I installed the cap kit, I looked closely for lifted solder pads. I focused on the pin header where the main PCB connects to the monitor chassis because I found I could provoke the problem by putting a little pressure on the connector. Unfortunately, I didn’t see anything that looked wrong with it. Once everything was reassembled, reds were present on the screen and I figured I had it fixed. Well, playing the game for a short while the following day proved me wrong. I still had an intermittent connection on the red signal.

After testing the monitor cable extensively to rule it out, it was time to pull the monitor chassis out again and inspect it. I figured I would just re-solder all of the pins on the main signal connector, but I really wanted to see if I could spot the problem first. It was tricky to see in bright light–probably due to glare from the shiny solder–but I managed to get a picture of it. This was the culprit: I probably could have reflowed the existing solder, but instead I used desoldering braid to remove it and then applied new solder. After putting it back together, I tested it out and I’m happy to report the problem is finally resolved. 🙂

The monitor in this cabinet is an Electrohome G07 built in 1982, so it’s about 28 years old today. This model was very common in Bally/Midway machines from the early 1980s and fortunately there is a lot of great information and troubleshooting advice available. The monitor still worked fine, but I decided the time had come to perform some preventative maintenance. Specifically, cleaning the chassis, installing a cap kit and replacing the flyback transformer.

A cap kit is essentially a bundle of new capacitors that match the existing capacitors on the chassis. When an electrolytic capacitor ages for nearly 30 years, it tends to wear out and no longer functions at the same specs it was built for. This stresses other components on the chassis and, if left long enough, will eventually cause more expensive (and hard-to-find) components to fail. Of course, it can cause odd issues with the picture too. Cap kits are fairly inexpensive and readily available from Bob Roberts. I bought the “deluxe” repair kit because it included a new flyback transformer and some other odd parts I may need in the future.

I began by discharging and removing the monitor chassis. I won’t go into details because other people have already done a fine job of it. I will include the obligatory warning that working on any CRT is dangerous due to high voltages that may be present. These high voltages may be present even if it the CRT has been unplugged for a long period of time. So, if you don’t know what you’re doing, I don’t advise tackling this sort of work.

Once I got the chassis out, here’s what I had in front of me… 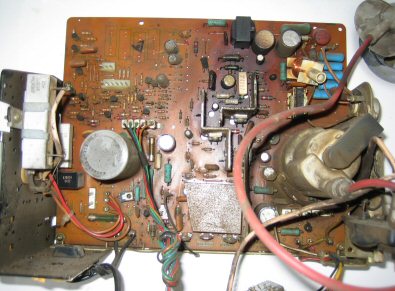 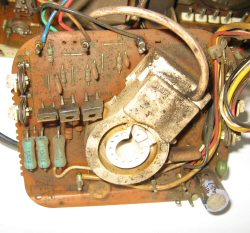 The smaller board is called the “neckboard” as it plugs into the neck of the CRT. Both were quite dirty. These parts are in a magnetic field when the monitor is running and they seem to attract dust like, umm… a magnet. I’ve read a lot of methods on how to clean one of these boards without doing harm to it. Some people go over them with q-tips while others hose them down in a sink and then dry in an oven on low heat. I’m sure either of those extremes is fine, but I didn’t want to waste time with q-tips and I didn’t want to involve an oven. I opted to rinse it down with a lot of rubbing alcohol because it’s generally safe on electronics, dries quickly, and won’t leave mineral deposits behind. I also used a cheap paintbrush and Simple Green in places where the the alcohol wasn’t loosening enough dirt. It was much cleaner and completely dry within an hour or so.

It was then time to install the cap kit and flyback transformer. A while ago I noticed I had a minor issue with the red color on the screen disappearing occasionally. While installing the cap kit, I looked very hard for any lifted solder pads on the chassis. I also did quite a bit of testing with my multimeter. I only found one spot that was definitely causing an intermittent connection and it happened to be one leg of a capacitor I had to replace. While I was at it, I performed the C303 upgrade on the chassis to help with “curling” problems. Details on the upgrade are available here.

Here’s how it looked after all the work… 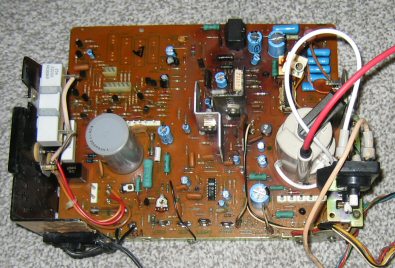 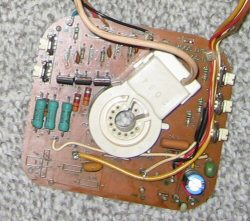 I finally put the chassis back in the cabinet and it powered it up. No sparks, exploding caps, or fire—just a nice clean picture and consistent red colors on the screen. Exactly what I was hoping for. 🙂

I got tired of looking at the dusty top glass on the monitor. Rather than just wipe it off, I decided to disassemble the monitor’s bezel assembly and give it a good cleaning inside and out. Here’s how the machine looks when stripped down to the bare monitor brackets: 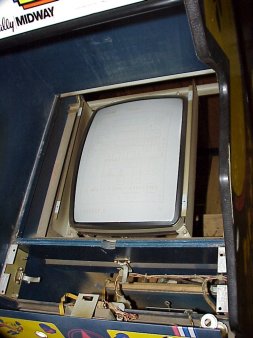 Believe it or not, there are FIVE panes of glass that must be cleaned to clear up the picture.

Cleaning each surface made a noticeable difference. Quite a bit of dust and grime came off the glass and now it’s practically invisible. 😀

I also took the black plastic bezel to the utility sink in my basement and washed it. A surprising amount of fine dirt came off of it too. A little bit of wiping and soaking made it look new again. While I was at it, I washed the four plastic clips that held the tinted glass and bezel to the monitor brackets. They had a slight bit of powdered rust on them from the screws that hold down the bezel.

After taking care of the removable parts, I vacuumed the brackets and surfaces around the monitor and then wiped all of them down. (I wasn’t about to put clean parts back into a dirty frame!) Finally, I put the monitor bezel assembly back together. I’ll have to remove the top glass again to do some minor paint touchups, but not anytime soon.

While I had the control panel open, I also removed the buttons from the panel. They had small gouges in them and I’ve already ordered a brand new set. I left the leaf-switches in place because they’re still in good shape. I also got a good idea of how the joystick is mounted on the cabinet. It’s surprisingly complicated so I didn’t bother with it tonight. I’ll tackle it some other time.

Here’s how the front of the cabinet looked when I finished cleaning:
(Sorry–it’s a tad blurry) 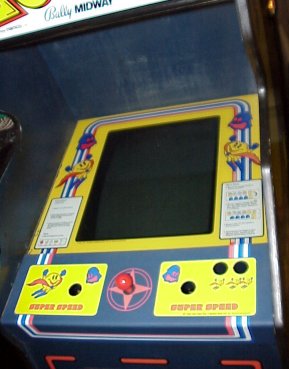